Blogs by study abroad and work abroad students from the University of Leeds and the Study Abroad Office!

In recent years, Japan has become an increasingly popular travel destination for all sorts of travellers. People interested in art, food, and pop culture – amongst other things – can all fulfill their touristic needs, and they can usually know what to expect from all of the popular media that we see surrounding Japan online. One thing that we rarely see, however, is the LGBT+ experience in Japan. Sexuality is quite a taboo topic in Japanese culture, and oftentimes one’s sexual orientation will go unsaid, but they will be assumed to be heterosexual. There is a lack of prominent LGBT+ representation in the Japanese media, and many Japanese people stay quiet about their identities, leading to a mass lack of awareness about LGBT+ topics. The idea of meeting anyone who identifies as LGBT+ seems foreign to many Japanese people, but that’s not to say that Japan lacks respect for sexually diverse individuals. In fact, most Japanese people seem curious to know more about these topics, since they aren’t exposed to them in their daily lives.

What Japan lacks in representation, however, it more than makes up for in safety. As LGBT+ individuals, it seems that our personal safety is often more of an important factor to consider when choosing destinations for study or travel. There are many risks that come with being LGBT+, and we have to be aware of potential intolerance and hostility more so than is necessary for many people. With this in mind I decided to go to Japan to study abroad, having heard of its reputation as one of the safest countries in the world. Over my 4 months living here I’ve never felt unsafe or worried for any reason, and I haven’t faced any of the hostile attitudes or behaviour that I might expect in other countries. 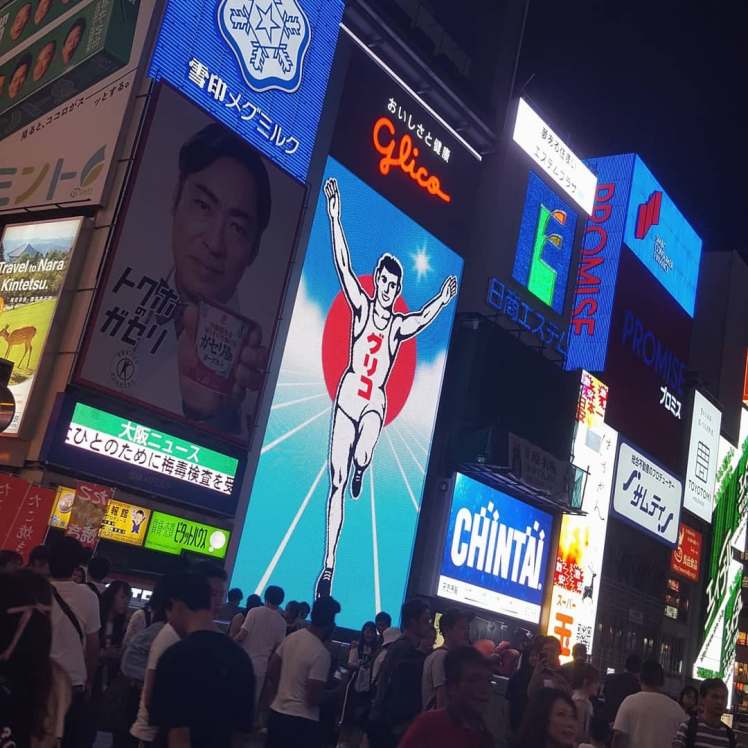 In regards to LGBT+ rights, Japan’s laws are progressive compared to the rest of Asia. Transgender individuals are able to transition legally (although there are some transmedicalist stipulations that aren’t suitable to the individual needs of many transgender and non-binary people) and Japan doesn’t have much of a history of criminalising same-sex sexual activity. Unfortunately, however, marriage equality is still not recognised in Japan and same-sex marriages that were carried out abroad are not considered valid. Same-sex couples are also not able to adopt in Japan, and there is a lack of legal protections against discrimination.

Osaka has a large amount of gay clubs, but they are usually segregated by gender, so mixed-gender groups will often be unable to go on a night out in a gay club together. A good alternative would be to go to a private karaoke room with friends, or to an all-you-can-drink bar, where you can try all of the Japanese alcohol and food you want for a fixed amount of time.

My personal experience here has been very positive. I was able to attend the Kansai Queer Film Festival in 2019 and see a screening of a film produced by a Japanese transgender director, and my host university (Kansai Gaidai) offered me multiple classes on sexuality and gender in Japan, which are very well-taught and informative. In my university I’ve also been able to meet many LGBT+ individuals, and find a sense of community that isn’t always offered by Japanese society. It’s important to remember, though, that my experience is specific to myself, and is taking place in one of the largest and friendliest cities in Japan – the LGBT+ experience may be very different in more rural areas.

My recommendations to any LGBT+ travellers to Japan would be to stay away from expressing your sexual identity publicly, because it’s frowned upon in Japan even for heterosexual couples to take part in PDA, or to be too open. It’s generally safe if you do choose to be more expressive but it may make others uncomfortable, so as a courtesy it would be best to be more subdued and subtle. I’d also say to not worry about hostile behaviour, because it’s extremely uncommon. You can usually walk around in Japan without fear of being targeted, so enjoy it! In terms of transgender and non-binary experiences, the society of Japan follows a very rigid gender binary, so it may not be the best fit for someone who likes to present outside of that binary. However, the clothes in Japan are often more gender-neutral than in the UK, so clothes shopping may be more of a positive experience than you’re used to.

Overall I’d definitely recommend Japan as a place to study or travel for LGBT+ students. It’s safe, welcoming, and although there are a lot of problems for Japanese LGBT+ people in terms of the law, the attitudes of the country as a whole are progressing and these legal issues are very unlikely to affect travellers.

Want to blog for us?

If you’re a Leeds student and want to blog about your study abroad experience, email us at: outgoingstudyabroad@leeds.ac.uk